Today is the final day of National Suicide Prevention Week 2019. I’ve started so many Facebook posts, only to delete them. I’ve read so many beautiful things. Tributes, memories, some people write of hope and life, some of the darkness.

I spent many years feeling as though I was fundamentally flawed. I felt as though there must be something inherently broken about me that my love for my mom couldn’t be enough to sustain her. I believed I must be unloveable because loving me was also, not enough to sustain her. I played accomplice to some bad ideas, hoping that she would find the happiness and love she needed to live.

I’d like to wave it all off as being the past, as being over with, and I’d like to tell you I know beyond a shadow of a doubt, that my love for my mom, or her love for me, were not broken or to blame for this struggle. And most of the time, all of the above would be true. But when I don’t take every thought captive and I don’t tell the very enemy who seeks to steal, kill, and destroy that his lies hold no power, I can quickly fall back to feeling inadequate and as though my love is broken, and that I am, at the very core, unloveable.

Fast forward to October 1st, 2018. My 12-year-old son attempted to take his own life. He nearly ended his life on a comfortably warm afternoon. We’d been outside most of the day, he’d seen his counselor about 2 hours before his attempt, and he was in a positive, helpful mood. In fact, we celebrated some wins with his counselor in regards to behavior, and we were looking forward to sign language class that night.

I left him to finish up an outside job, while I went inside to call my husband, start a quick pan of brownies, and get the littles ready for our evening. My 11-year-old son found his brother, acted bravely and quickly to aid his brother and then came for me. I wish the moments from my young son tearing through the front door, breathless, through the next afternoon were a blur. Far from it. I remember, in vivid detail, every step.

Medically, they offered us no hope of our son living, and his prognosis, should he live, was grim. A doctor, on a brief round, told me it was unlikely my son would return to his original cognitive and physical condition. My husband even pleaded with me to find one of my off-the-beaten-path remedies to reduce brain swelling, regain cognition, and aid his struggling body. I came up empty-handed, telling my husband I didn’t think there was an herb or oil to bring him back from this.

God intervened, and we watched an absolute miracle. Not only did our son live, but he was fully restored to his physical and cognitive state prior to his suicide attempt.

Which brings me to the whole point of my writing today.

I see the stigma lifting from suicide that results in death. We’ve lost several famous people to suicide, and many people are having conversations – in person, on social media.

Suicide, like every other thing we face, is not one size fits all. There isn’t one reminder, one solution, one approach that will save all the lives threatened by suicidal thoughts. I desperately wish there was.

I walked into many different appointments with my son – counselors, psychiatrists, nurses, doctors. I kept hoping someone could tell me how to spot this, and prevent it, and give us a 10, 12, 24, 50, 100 step plan that would line out how to keep us from ever facing this again. I would complete any number of steps to know that he wouldn’t struggle like this again or to know that if he did, he would reach out, or we would recognize, or something would happen to take it all away and help him feel happiness, hope, joy, excitement, and a zest for life.

Despite a safety plan that my son actively created, point people to reach out to, crisis hotlines, and roleplaying how to have crisis conversations and not be an overbearing parent but a listening ear, we found ourselves facing a second attempt.

It was after this second attempt, and his third stay in the hospital, that I walked into a psychiatrist’s office to discuss his outpatient treatment. My questions about what to expect from the medications, the therapy plan, etc. were met with a grim outlook and grave words.

“Do you know the statistics for someone his age with 2 suicide attempts in 4 months?”

My son was reduced to statistics, and I just shook my head.

“No one has gone over those with you?”

He seemed surprised, and while I can’t recall the specific numbers, and I can’t bring myself to look them up, I remember him crossing his arms in front of him, and shrugging as he told me he didn’t have much hope for my son making it another year.

“We’re just waiting, and watching, that’s all we can do.”

He asked me if I wanted to make any med adjustments or had noticed side effects that were unpleasant, and dismissed me.

I didn’t feel like my legs could carry me out of that appointment. Here we were, only 4 months out from his initial suicide attempt, and a month out from his second attempt, and his psychiatrist spoke as though this was hospice care for the mentally ill or struggling.

I am humbled and grateful that we serve a God who is involved, who sees us, who sees our pain, and who answers when we call. It is His strength that has sustained me, and our family, through all of this.

See, there is a lot of stigma around suicide attempt. It is a space that is not spoken of.

Amongst those who have lost someone to suicide, I am lucky because my mom and son still live and share this life with me. I cannot imagine the pain they endure because their loved one died by suicide. I rarely admit this to anyone, but I don’t often feel lucky, either. The fear that I live with about when or if another suicide attempt will occur, and whether or not it will result in death, is heavy to carry. I am hyper-vigilant about every text message, email, phone call, video call, letter. I’ve called my dad and sister and asked them to keep an eye on mom. I find myself checking in with my son’s step-mom – asking if everything seems okay on their end because phone calls seem “off” to me.

Among those who haven’t struggled with the darkness, or who won’t admit they have, it’s awkward and uncomfortable. Or there must be someone to blame – a bully, bad parenting, a bad home life, bad school, subpar performance in athletics, a lost game, a lost friend, death of someone. So if someone will talk with me, the conversation ends quickly when there is nothing to blame – because I must be hiding something or it hasn’t come to me yet.

Those who have struggled will offer condolences, and occasionally their experience with things people shouldn’t say to someone struggling. But in all of the things I’ve been told I shouldn’t say, I don’t have a grasp on what I should say to my mom or my son.

A friend of mine is walking through the mess and heartache of addiction with her daughter. She posted some time ago about someone saying if she loved her daughter enough, she wouldn’t be battling addiction. I love how eloquently she said her love isn’t broken or inadequate. It is fierce and present and available.

If you have a loved one who struggles with suicidal ideation, depression, addiction, or ____________, then I want to tell you this: Your love is not broken. It is not insufficient. It is not inadequate. Keep loving. Don’t build walls. Don’t shut people out or shut down or quit. Fight the good fight, pray hard for the person/people you love, and keep loving them.

Also, crisis hotlines are not only for the person feeling suicidal. You can call for support, encouragement, action steps, for answers, and for someone to talk to. I’ve called twice. Both calls were answered by someone willing to listen to the fear, the guilt, the heartbreak, and they were kind. It didn’t feel like the stigma was there like it is everywhere else I go.

I am a Jesus-girl, wife, mom, writer, sister, daughter, baker, cook, maid, teacher, farmer, and more. I am busy raising kids, and praying daily for them to be servants of Christ. I am the blessed wife of a very hard working man. We live on a small farm where we are learning more about sustainable living. We do our best to enjoy life, help others, and use the talents God gave us for His glory. Our goal is to teach our kids to do the same. I welcome all emails - you can reach me at reginawalkerauthor@gmail.com - feel free to email me anytime, just be patient in waiting for my response! View all posts by Regina Walker 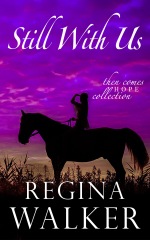